Setting the Right Feeding Program for Your Calves

The Grober Young Animal Development Center opened its doors in 2009 with the mission of uncovering and presenting best rearing practices for young animals.  Over the past three years, approximately 300 calves, 40 lambs and 40 kid goats have resided at our Woodstock facility for the purpose of conducting nutritional and management research.   We have partnered with others from the industry (feed companies and producers) in order to ensure the research is applicable in today’s farming community. Automatic feeding machines for calves has been a part of the dairy management la 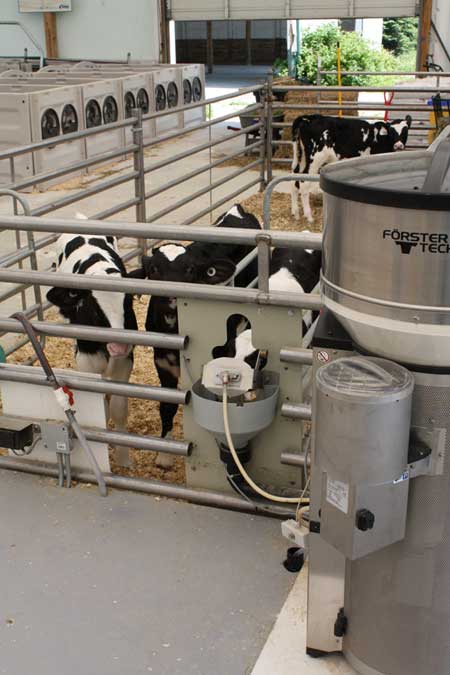 ndscape for a number of years facilitating the feeding of calves by  reducing the chores of preparing and delivering milk replacer.  Time spent in calf barns is now focused on management, cleaning and animal observation.  While the automatic feeding machine is an excellent tool, programming the feeding schedule is still a key part to the success of those calves. In 2011, Grober evaluated two different feeding programs through the automatic feeding machine.  We wanted to understand if allowing a calf to determine her own appetite through unlimited access to the milk feeder would be the right approach to feeding.  Much academic research over the past 20 years has supported increased milk intake for optimal calf growth and their subsequent performance during first lactation.  In 1968, Hafez and Lineweaver found that calves suckled on average 16-24% of their bodyweight, which would amount to 7.2-10.8 Liters[1] (L) per day for a 45 kg (100 lb) calf.  That range would indicate that different calves have different appetites, whether that variation was based on size, genetics or environment was not evaluated in that research. For the purpose of this trial, 38 calves were split into four groups all fed by automatic feeding machines.  One machine, which fed two groups, provided an unlimited amount of milk replacer throughout the day and the other machine limited calves to consuming 9 L/day.  All calves were allowed to drink between 2 and 3L per visit to the machine.  Calves receiving limited amounts of milk replacer were provided the following schedule: 6L/day for the first 5 days, 9L/day for the next 41 days and then weaned over 10 days (milk reduced from 9L – 2L over the 10 days).  The total time on milk replacer for both groups was 56 days. Calves offered an unlimited daily consumption of milk replacer consumed 73.6 L (11 kg; 24.2 lbs) more milk replacer than the limited calves.  Unlimited calves consumed on average 8.4 L/day and limited calves consumed on average 7.1 L/day.  Bodyweights were slightly higher in the unlimited groups from the start until weaning (week 8) (figure 1).  Overall bodyweight gain was not different between groups (50.6 kg – 111 lbs for unlimited and 51.0 kg – 112 lbs for limited). Starter intake was not different between groups until weaning time when limited calves consumed more starter – 1.5 kg/day (3.3 lbs/day) limited versus 1.1 kg/day (2.4 lbs/day) unlimited (figure 2).    There was no difference in health events; both groups had an average of 3 health events/calf. When designing a feeding program using an automatic feeder it would appear that limiting the amount of milk replacer to ensure calf needs (maintenance and growth) allows for increased grain intake and smoother transition at weaning while not compromising growth.  Further work at the Grober Center (2012) will be done looking at providing unlimited milk to calves over the first few weeks and then gradually reducing milk intake over the next 5 weeks. 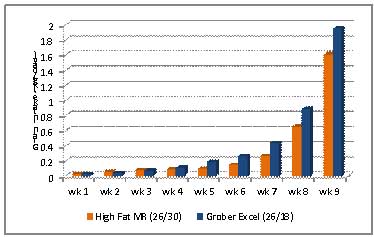 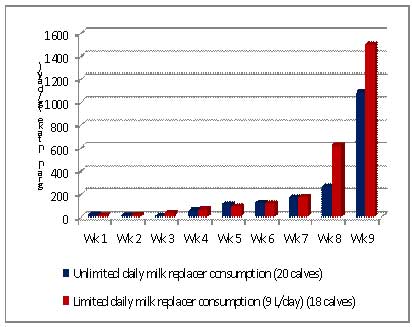