The terms accelerated and enhanced have been used over the past 15 years to describe an increased plane of nutrition in calves. However, calves require that increased nutrition in order to optimize growth. Moreover, production objectives such as:

The basis of the calf growth model

The calf’s digestive system is immature and requires milk or milk replacer as the primary source of nutrition. The first two months of calf growth are the greatest opportunity to optimize early growth. There has been some evidence showing 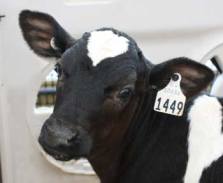 a positive relationship between accelerated feeding programs and first lactation milk output (2,3,5). VanAmburgh’s research team (Cornell University) were able to determine that for every 1lb of average daily gain prior to weaning, heifers produced approximately 1,000lbs more milk throughout first lactation (6). The implications are clear that proper nutrition right from the start will have long-lasting economic benefits. Energy intake is the main driver of bodyweight gain (BWG) however protein intake can influence both BWG and body composition. Protein can be utilized efficiently during the first two months, especially when protein comes from highly digestible milk products. While early nutrition is very important, over-conditioning (particularly between 3-15 months) can have detrimental effects on mammary gland development and thus future milk production. Feeding for higher gains in the milk phase (< 3 months; ≥ 900 g/d) may prevent heifers from over-conditioning. Furthermore, gains >840g/day (between 12 and 65 days of age) have yielded a higher proportion of cows finishing 1st lactation compared to calves gaining ≤741g/day (1). The balance of nutrients provided in the milk phase is critical (Figure 1). Providing extra calories primarily through fat can lead to fat deposition. Energy from protein enables skeletal and muscular development while enhancing other cellular functions including the immune system. The milk phase offers the best opportunity for setting your heifer up for optimal growth and future production. A milk replacer balanced correctly for protein and fat is a farmer’s best tool for producing optimal heifers. 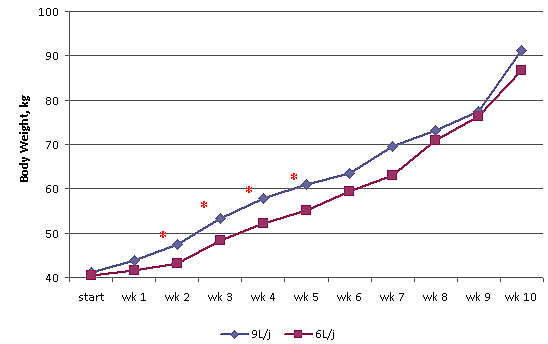 What it means to the producer

In raising heifers, the largest cost inputs are feed and days of growth needed to achieve productive status. Optimum heifer growth is a function of the time to reach first calving with the correct bodyweight, height, age and development to express full lactation potential. Maximizing the potential production and minimizing days to first calving can help in overall farm economics. When applying a tool developed by the University of Wisconsin, considerable cost benefit can be shown when feeding an optimal program and calving at 22.8 months. Table 2 The cost benefits per calf of an optimal feeding program, using typical figures.

Using University of Wisconsin – management tool http://www.uwex.edu/ces/dairymgt/tools/index.html *Milk replacer costs for the conventional and optimal programs are based on Grober Excel and calf starter 22%, May 2010.