There have been many positive results seen from the inclusion of DOSTO® Oregano in milk replacer for ruminants in Europe. After bringing this ingredient to Canada, we conducted our own trial at the Grober Young Animal Development Centre in Summer 2022 on a group of 36 calves.

TRIAL: This trial looked at the benefits in calves of adding DOSTO® Oregano powder to milk replacer. The trial was conducted at the Grober Young Animal Development Centre over 7 weeks with a total of 36 calves, divided in to two groups. 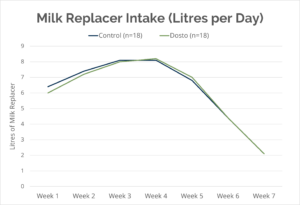 Although DOSTO® Oregano powder alters the smell of the milk replacer, we did not find any differences in milk intake.

A main mechanism of action of oregano is to slow the growth of certain bacteria, which has indirect consequences of supporting a healthier environment in the gastrointestinal tract. With a healthy gut environment, digestion and assimilation of nutrients from the diet is more efficient, resulting in improved feed efficiency (Table 1). By adding DOSTO® Oregano to the milk replacer, an increased nutrient utilization was found in an already very efficient period of a calf’s life. 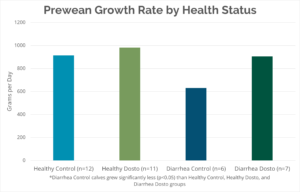 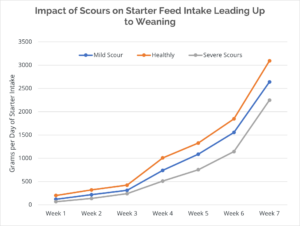 Figure 3: Impact of scours on starter feed intake leading up to weaning, GYADC 2022

From previous GYADC research trials, we found that calves which were diagnosed as a diarrhea case, not only had lower growth rates, but consumed less calf starter. Ensuring all calves are provided with enough quality colostrum is a fundamental start to reducing disease incidence and/or severity. Alongside good calf management practices, special features of Grober milk replacer, such as DOSTO® Oregano, may help to reduce the impact of scours. If feeding whole milk, Grober’s uniquely formulated Promiks supplement for whole milk will provide essential vitamins and minerals needed for the immune system to properly function, in addition to other vital pathways in the body.

Overall, the results seen in our 2022 trial at the GYADC confirm many of the benefits seen in other trials of DOSTO® Oregano. By feeding a milk replacer with DOSTO® Oregano in it, calves may have reduced treatment needs, improved growth and better overall health. This results in a healthier herd, reducing overall costs.

Heat Stress – It Effects Calves Too