Iron deficiencies in milk-fed calves and how Promiks can help.

There are several vital roles iron plays within the body, the most noted one of course is as a component of hemoglobin, allowing oxygen to be transported to cells throughout the body. However, iron is also a component of enzymes involved in mitigating negative effects of free radicals generated during an oxidative stress response.

When thinking about iron deficiency (anemia) in calves, an obvious train of thought may be to the classic milk-fed veal calf, where iron status and meat colour is in a fine balance. However, whether a calf is raised for veal, or a replacement heifer, the risks for developing low iron status, remain.

Hemoglobin represents a very large pool of iron within the body, in addition to concentrations found within the liver. At birth, increased risk for low hemoglobin levels have been found if a calf is a twin, a bull, or is born to a first calf heifer. The amount of iron capable of being transferred across the placenta during late gestation is suspected to be one cause of anemia at birth, and seems independent of the cow’s hemoglobin status. It is not clear the proportion of dairy calves which may be impacted by low iron status at birth (clinically anemic or subclinical low iron levels), nor the implication this may have on the risk of developing calfhood diseases.

Young calves are very efficient at absorbing iron from their diet, thus, providing a milk replacer fortified with all essential vitamins and minerals is an easy solution to alleviate neonatal calf anemia. In addition, since small amounts of dietary iron are needed, offering calf starter early may provide another dietary source. However, when only offering whole milk, calves are quick to become anemic.

Of calves studied, 41.6% of calves had low hemoglobin and 38.9% of calves had low serum iron at arrival to the Grober Young Animal Development Centre (GYADC).  Calves with low iron status had significantly (p=0.0339) more days with a fecal score of 3 (watery diarrhea), and significantly (p=0.0101) higher respiratory health scores over the first three weeks. Subsequently, calves fed Promiks had lower treatment interventions for scour symptoms. Feeding calves with Promiks included in whole milk powder allowed for a maintenance of hemoglobin levels over the first 28 days, and maintained higher serum iron concentrations over this period as well. Body weight gain over the time on milk was 11% higher for calves supplemented with Promiks compared with non-supplemented calves, with a numerical improvement on feed efficiency.

Providing a vitamin and mineral supplement to young calves fed whole milk can be a useful nutritional approach, along with good management practices, to ensure the best health and growth for calves. 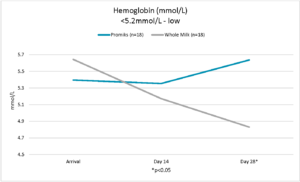